My Course “Learn Programming in Go (golang): A Rich Guide for Beginners” is online. It is a comprehensive introduction to Google’s Go programming language (golang) for beginners & intermediate programmers.

Due to its large scope, the course is equally suitable for beginners and slightly more advanced developers and it is full of examples, quizzes, hands-on exercises, solutions to that practical exercises, and a tiny code repository — accessible via Github.

When you sign up for this course, you have lifetime access to the course. You can learn at your own pace and return to content at any time for deeper insights or to learn additional concepts when you are ready.

This course also comes with a 100% money back guarantee.

I think this is one of the most comprehensive courses in English for learning the Go programming language.

And if for some reason the course doesn’t work for you, you can get a full refund within the first 14 days*.

Go is an open-source programming language that makes it easy to develop simple, reliable, and efficient software.

Go was developed by computer science luminaries at one of the best, if not the best, software development companies ever – Google. The design and implementations are by Robert Griesemer, Rob Pike and Ken Thompson.

Go is a very good choice for learning a programming language because it was developed by some of the same people who created the C programming language, Unix, and UTF-8 – some of the most influential contributions to computer science. With Go Robert Griesemer, Rob Pike, and Ken Thompson created a modern programming language that can easily run on multiple processors in parallel, works smoothly in different environments, and makes it easy for programmers to write programs with a very streamlined and user-friendly syntax.

Why did Google develop a new programming language?

In Google’s words, “Go was born out of frustration with existing languages and environments for systems programming. Programming had become too difficult and the choice of languages was partly to blame. One had to choose either

all three were not available in the same mainstream language. Programmers who could were choosing ease over safety and efficiency by moving to dynamically typed languages such as Python and JavaScript rather than C++ or, to a lesser extent, Java. Go is an attempt to combine the ease of programming of an interpreted, dynamically typed language with the efficiency and safety of a statically typed, compiled language. It also aims to be modern, with support for networked and multicore computing.

Finally, working with Go is intended to be fast: it should take at most a few seconds to build a large executable on a single computer. To meet these goals required addressing a number of linguistic issues: an expressive but lightweight type system; concurrency and garbage collection; rigid dependency specification; and so on. These cannot be addressed well by libraries or tools; a new language was called for.”

Join learning one of the best programming languages ever designed. You will get knowledge, ideas, concepts, inspiration, quizzes, and code samples to learn to create software and applications yourself according to your needs.

Are there any course requirements or prerequisites?

Who this course is for:

On the overview page you can already have a look at this or that video.

A promotional email I sent out recently

Subject: Resources added for your help!

“Yes! We’re all individuals!”, said already the crowd of people with one voice in the classic movie “The Life of Brian”.

And it seems that we all have different learning habits too. Some learn in face-to-face classes in a group at school or during a lecture, some learn by reading a book, some need practice and some learn by try & error and others by example.

At Udemy, you learn mainly by watching videos and applying applying what you learn in simple practical tasks. For one person this may already be challenging, but for another it is trivial and banal.

To meet the different requirements I have attached to practically all lessons further or supplementary links to external sources, which should help you to either further illuminate or deepen the respective topics. All of them lead to free websites and deal with the topics in a way appropriate to the course.

I appreciate a good rating and a few words of feedback!

Thank you very much! 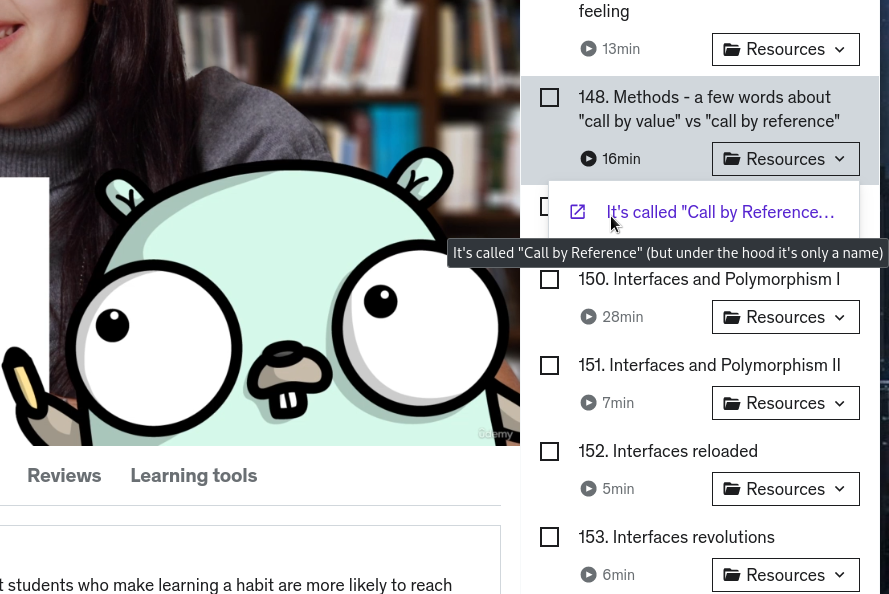 You will find the links under “Resources” of each lesson in the overview of the course.